The LORD is good….and He knows those who trust in Him–Nahum 1:7 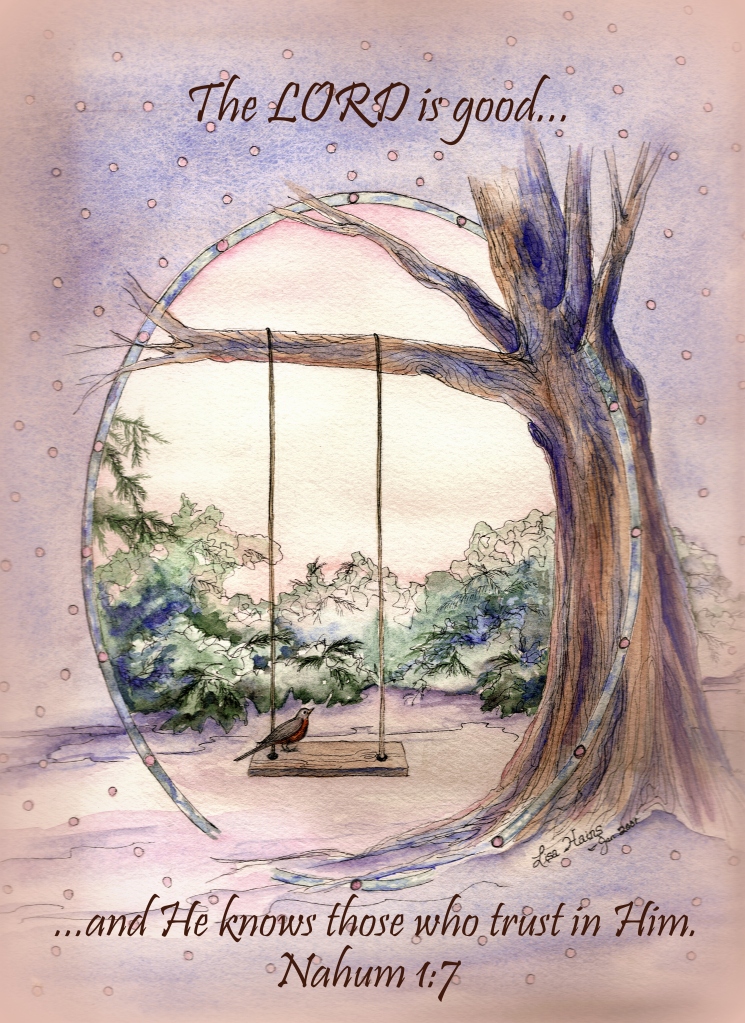 Seven years ago today, my husband John came home to discover that our house was on fire!

Gratefully, fire rescue crews from all over our area quickly responded–I think there were seven different stations that helped–but the fire was difficult to extinguish.

When all was said and done–the house was ruined!  And most of our belongings were either lost, destroyed or damaged.

Among them, many of my paintings–

Most of the paintings had been stored in the living room–many in rattan suitcases–which, of course, caught fire.  And as the flames licked up the sides of those cases, something remarkable happened.

The suitcases of paintings fell into the basement–which was by that time filled with water from the firemen’s attempts to extinguish the fire!

And the moment the suitcases hit the water, the flames were quenched!

But water colour paintings are rendered on watercolour paper–and paper pinned underwater for two weeks is a recipe for ruin.

After two weeks, once the fire investigation was completed, we were able to drain the water from the basement and my husband sifted through the debris, hoping to find anything of value–sentimental or otherwise!  And as he worked in the frigid January temperatures, he did uncover some treasures!  Including the cases of paintings!

It was amazing!  And I am so thankful!

Once the charred cases were opened, we found the soggy paintings–and spread them out to dry!  I think they all were damaged to some degree.  They were covered with smoke patterns, cinders, broken glass and, with some, images from the paintings had been transferred onto their neighbours while under the water!

This painting is one of the survivors!

The smoke that covers it is mostly hidden behind the vignetted edging, which I added in editing.  If you look closely, though, you’ll see that the snow around the swing is suspiciously darkened—–it’s smoke—

But I thought it was appropriate to share this painting with you–today–on the anniversary of the fire!

The Lord was so good to us through that whole ordeal!  He showered us with love and kindness and provision!

And friends, neighbours and strangers were such a blessing!

The Lord is a very gracious God!

When bad things happen–and they will!–God is not the one to blame!

Instead, He is the very One to thank–for He can provide the rainbows in the middle of our storms!

While we live our lives, we are going to sustain damage in many forms–just like this painting!  Yet it is God Who can work with us, covering our sins and imperfections–if we let Him–by drawing close to Him, and clinging to–and following His word!  He offers redemption from our sins–through the precious blood of Christ, when we are baptized into him to have our sins forgiven.

We can experience that same thing–on a much grander scale–our very own redemption!  Now that’s truly beautiful!  His grace is completely powerful—and amazing!

The Lord is good…and He knows those who trust in Him!  You can trust Him!

Tags: The Lord is good

2 thoughts on “The LORD is good….and He knows those who trust in Him–Nahum 1:7”